To the “end user” – the Tempe or Tucson homeowner turning on the tap to fill a kettle for a cup of tea – it is all just water. In composition, color and consistency, it is no different from the liquid pouring forth from taps anywhere else in the U.S.

It is clear, clean and plentiful water. A basic building block of an American community.

So, what’s so complicated about that?

The answer, of course, is that among the essential elements of an organized society, almost nothing is more complicated than water. Clear, clean and plentiful water doesn’t just happen, especially in the American Southwest. And even more especially in an age of drought.

From enormous plumbing fixtures like Hoover Dam and the 336-mile Central Arizona Project canal system to the mind-numbing nature of water law, the journey of water to a consumer’s tap is a vast complexity of multi-party legal settlements that strain bookshelves and financial investments that tax the stability of governments.

With some notable exceptions, perhaps no single event has proved more significant to Arizona’s water future than the Groundwater Management Act of 1980.

The 1922 compact among the seven Colorado River Basin states to divide up the river into annual allocations? Yes, that was huge. So was the construction of all those Colorado River “plumbing” fixtures. But, beyond those, the 1980 Act was as big as they get for the state.

By a single act of its Legislature 36 years ago, Arizona moved to the forefront among the states in terms of planning and managing its water future.

As a result of the Groundwater Management Act, new development in this fast-growing state’s actively managed areas would have to prove an assured water supply capable of sustaining its residents for at least 100 years.

No other state’s water-supply requirements at the time came close to creating such a long-term sense of water-certainty for its residents. 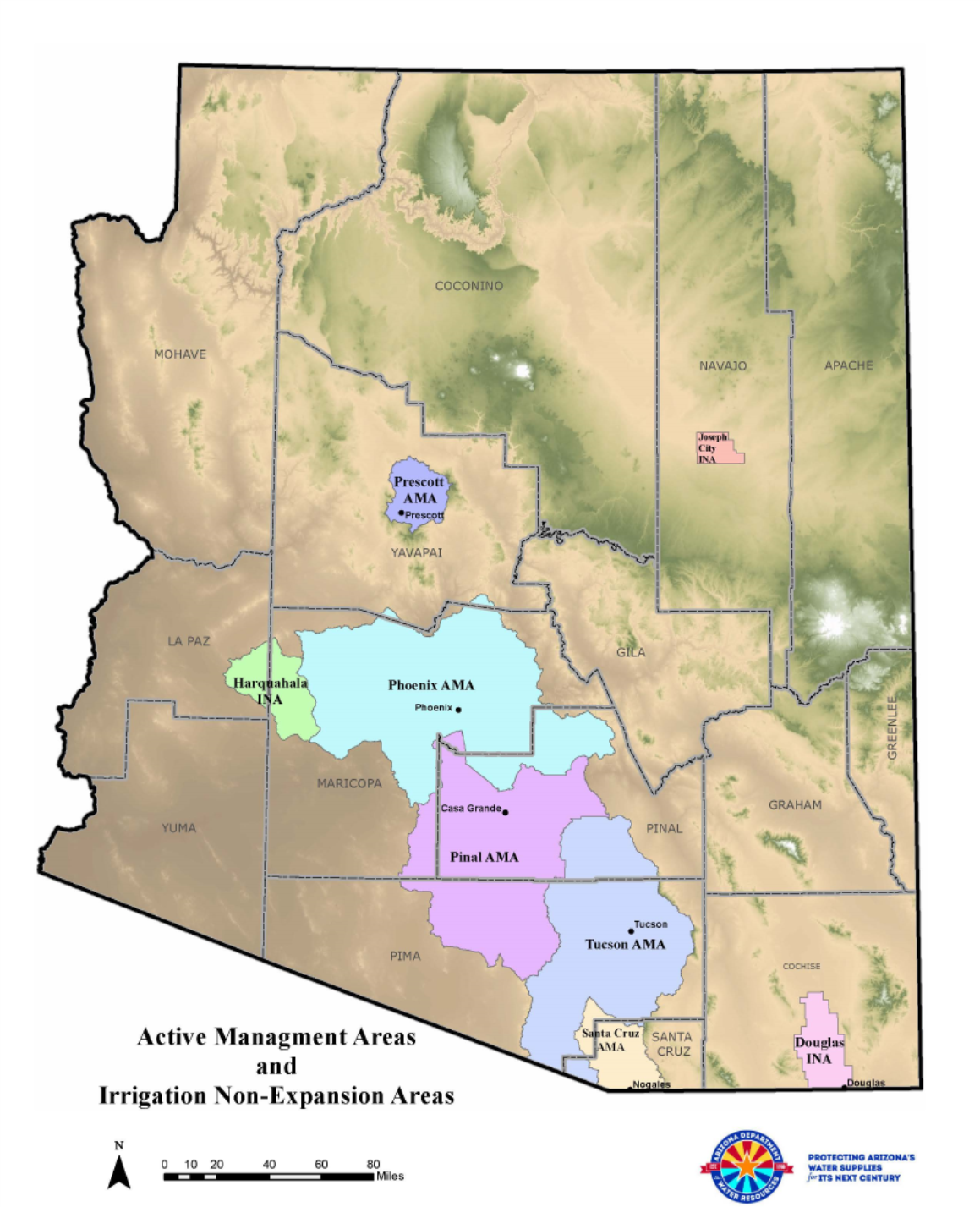 At the same time, the law required that its active-management areas, or AMAs, wean themselves fromgroundwater pumping. Four of Arizona’s five, largely urban, AMAs are required to reach “safe yield” – that is, they must diminish reliance on groundwater to the point that recharge and extraction are in rough balance – by 2025.

The law has helped spur innovation. See: The Arizona Water Banking Authority, a novel, credit-based system of storing water underground for future use that arose from Arizona’s commitment to protect and manage its aquifers.

And it has prompted imitation. In 2014, the California state Legislature passed its own Sustainable Groundwater Management Act, which for the first time allows local California agencies to adopt groundwater management plans.

Overall, Arizona’s commitment to water stewardship has paid off.

Since 1957, Arizona’s population has grown nearly 500 percent, to 6.7 million residents now. Its economy has exploded: from a gross domestic income of $13.4 billion in 1957 to about $240 billion in 2015. Yet, despite that astonishing growth, Arizona’s total water use… declined. Today, Arizona uses less than 7 million acre-feet of water per year – three percent less than users consumed almost 60 years ago. 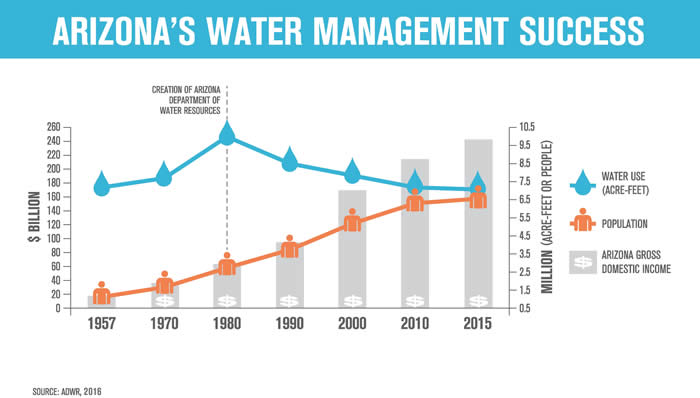 Not coincidentally, the fast-increasing rate of water use that once vexed the state began its steep decline back toward 1957 levels in… 1980. The year of the GMA’s passage.

No law is perfect, however. And many water experts believe Arizona’s GMA may be showing its age.

Some of them, such as Kathy Ferris, former executive director of the Arizona Municipal Water Users Association, argue that its provisions governing 100-year water supplies need updating.

Others note that while the law regulates groundwater use in the most populated areas of the state, rural regions are uncovered by the law, and many rural aquifers are showing signs of stress. Gov. Doug Ducey’s Arizona Water Initiative is studying the water conditions in many of those rural regions even now.

As essential as the 1980 GMA has proved to be for Arizona, its passage at the time was far from a given.

“Sometimes things have to get so bad that it’s almost impossible to do anything more before people really come together,” recalls former Arizona Gov. Bruce Babbitt, who recently spoke with the Arizona Department of Water Resources about the origins of the Arizona Groundwater Management Act.

“The whole structure was ready to collapse,” remembered Babbitt, who assumed the office of governor in 1978 following the death of Gov. Wesley Bolin and who subsequently was elected twice to the office.

In Arizona in 1980, the stars suddenly began to align toward reform of water law. Industrial groundwater use was unregulated and growing fast. Federal pressure to reform – exerted through Congress’ agreement to finance the construction of the Central Arizona Project – was intensifying.

And, at the same time, a bipartisan group of state leaders, notably including Babbitt (a Democrat) and Senate President Stan Turley (a Republican), were coming into their own.

“Sometimes it’s that kind of disaster that finally motivates people to do what perhaps they should have done much earlier,” said Babbitt. “But the table was set when I took over those negotiations.”

Next Article: In an interview with ADWR, former Gov. Babbitt recalls what it took for Arizona’s political leaders in 1980 to produce a law that at the time stood as one of the most ambitious reforms of groundwater law in the nation’s history.